If you’ve ever wondered if a new teaching strategy, school improvement program, or educational policy actually works from an evidence-based perspective, then consider subscribing to the What Works Clearinghouse (WWC) Study Review series.  Every month (roughly) the WWC releases short (two-page) reviews of important educational studies by describing the intervention and the findings.

These high level snapshots of research are a quick read and point you to deeper information about the study’s details.  In addition – and this is the big value-add! – the WWC provides a rating of each study based on the scientific quality of the research design and analysis.

3.  Does Not Meet Evidence Standards 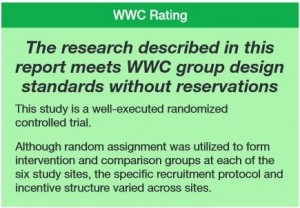 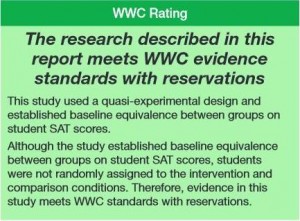 Example #3 – Does Not Meet Evidence Standards 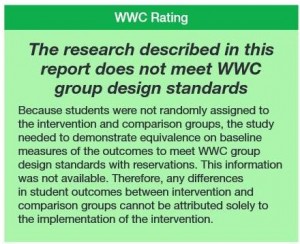 The first study used a randomized controlled trial design with good execution and sampling. The second study suffered from the use of a convenience sample and non-random assignment to the treatment and control groups. And in the third example, participants were not randomly assigned to either the treatment or control groups and the authors did not provide information about how the two groups compared prior to the intervention.

The beauty of the WWC’s rating system is that it saves time. If you’re interested in finding evidence-based strategies and programs in education, then you can focus on the studies that meet the gold standard in research design and implementation, as found in Example #1. In the other two examples, however, the evidence is questionable, so any conclusions or findings about either study should be treated with caution.

Much More on the WWC Web Site

In addition to the single study reviews, the WWC also provides intervention reports, practice guides, and quick reviews in an easy to use searchable database.